With Apple releasing their deprecation notice for macOS Server functionality, several macadmins have been asking what they can do to continue to manage services like Imagr, Munki and Reposado.

For some time, my recommendation has been CloudFront and while this post will not get into how or why to configure CloudFront, it will show you how to create automated invalidation rules to further refine your deployments.

Why use object cache rules vs invalidation?

Imagr, Munki and Reposado all deal with flat files and plists to define their behavior. Quite often you will change the content, but you will almost never change the filenames. With CloudFront this is problematic as your users will continue to download cached objects vs your newly updated ones.

While you can certainly script this, Amazon has specific rules with how many times you are allowed to invalidate using the API.

While 1,000 invalidations does seem quite high, imagine each time you update your munki catalogs, manifests and pkginfo files. You could quickly eat up these invalidations in only a few days.

How to define an object cache rule.

In your AWS console, go to CloudFront Distributions -> your CloudFront instance -> Behaviors. You will more than likely see a default path pattern of * - leave this alone.

Go to Create Behavior. The most important settings are highlighted below and are as follows:

The path pattern is fairly obvious but I will explain with an example munki repo. Bolded items are typically where the plists will reside.

If you wanted to automatically invalidate your catalogs, manifests and pkginfo caches, you would simply create three object cache rules with the following path patterns:

With recent versions of munki, there is now a _icon_hashes.plist for all of your icons. When you run makecatalogs this file is updated if any new icons exist, so you will probably want to create a rule for this with the following pattern:

Finally, you may want to create an object cache rule for your client resources files. While these don’t change often, it could throw you for a loop when you make a change and don’t see it on appear.

This one is simple - HTTPS Only. Don’t allow http, ever, even for testing.

In the following image, you will see a full object cache rule for all munki catalogs, with a highly aggressive expiration of two minutes (120 seconds). This will mean from the time you do a s3 sync to your CloudFront instance, in two minutes, your users will be able to see new packages in Managed Software Center. 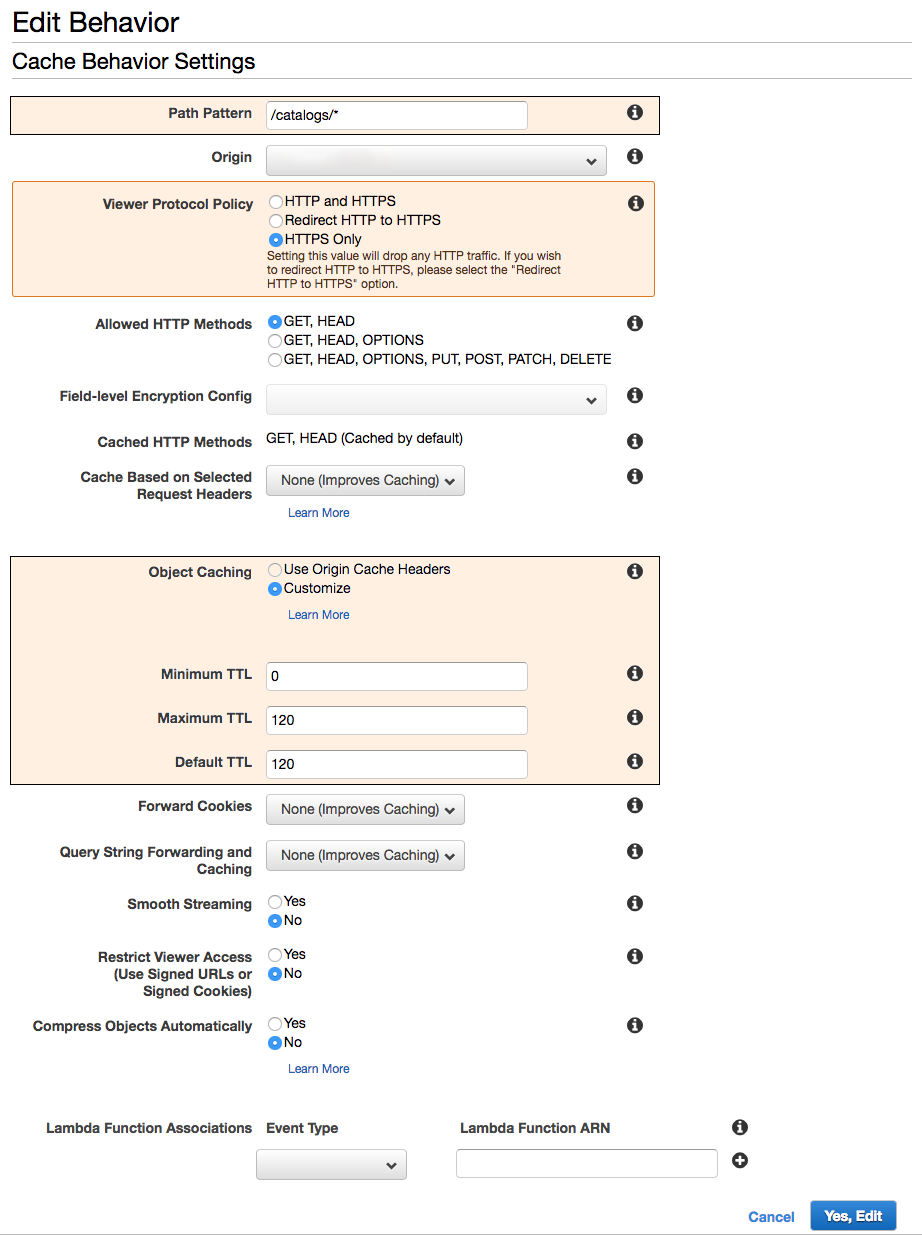 After you have created all of the rules you want, you want to make sure they are above your default rule.

No more manual/aws cli invalidations and no potential for paying Amazon more money. :)